Jump to the athletes part

*You will miss the contest

The seventh day after my arrival in Mekele I was to meet David at 7am in order to go to Wukro. The trip would take us around 2 hours using the public transportation. The plan for the following days was first to visit a dam [Check the Mini-Dam post] and later meet with the managers of the athletics team of Wukro in order to define the next steps for the project they were developing: to bring some runners to the Behobia-SanSebastián race that was about to be celebrated later in November. In the afternoon, I’d stay in the mission to meet Ángel, sleep there and in the morning, at 6am, go the training session of the athletes.

I had heard speak about Wukro since I was a child. On the one hand, the Athletics team of Hernani usually organises the San Silvestre race that is run on christmas using the act to collect funds for this town. On the other, I knew about a priest, also from my hometown, that 30 years ago arrived in Ethiopia and built there a mission.

In the two days I spent there I had the opportunity to share some moments with Angel (Olaran), also known as Aba Malaku, who has spent more than 50 years as a missionary; 20 in Tanzania with the tribe Wanyamwezi, the sons of the moon, and the last 31 in Wukro, Ethiopia, where he helps orphan and to those in need through his Saint Mary mission.

Angel, who has already reached a certain age, shows the calmness and the integrity of someone who has lived a lot, and even though his limitations, still keeps the energy that allowed him do all what he has done. Prove of it is the three push-ups I saw him perform in front of the dinning room while he was joking with two of his colleagues.

He also let out some spark of illusion when he found out there was a youngster visiting from his hometown and I was also surprised by his sense of humour as he joked around when he was more relaxed during dinner. 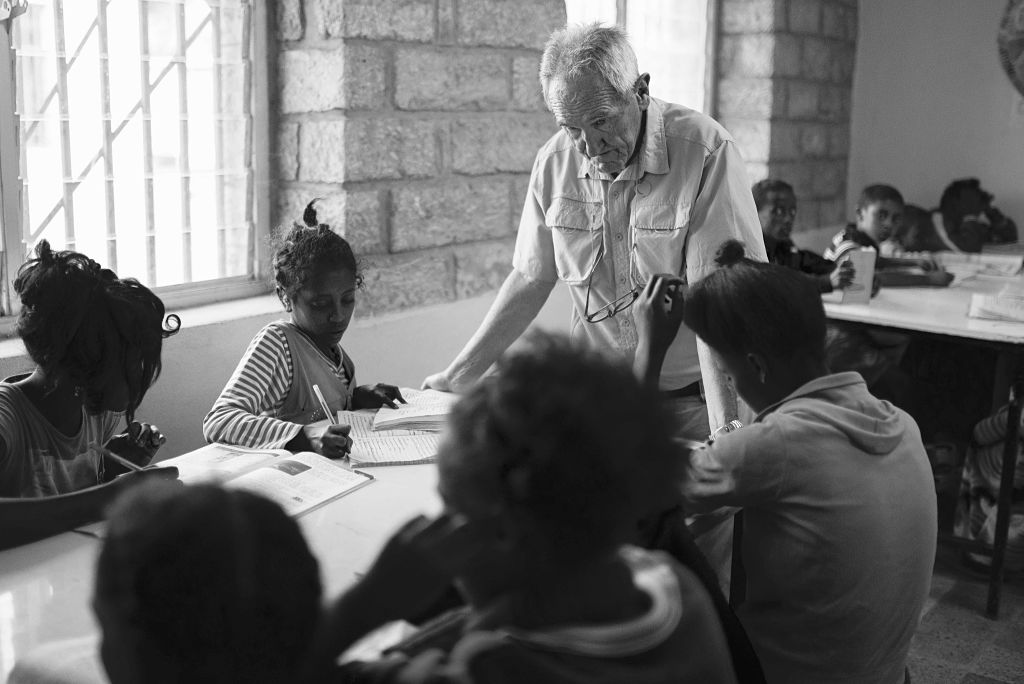 After arriving in Wukro from the dam we headed to the stadium to make our first stop in a small shop that was at the entrance. The athletes used to train at 6am, when the temperatures are still fresh and the sun starts to raise. However, after the session the kids used to go to school without eating anything, which is not a very healthy behaviour.

David was the responsible of coming to the shop every two weeks in order to pay to the man the bananas that were distributed among the runners after every training session. This initiative was founded by Etiopia Utopia Foundation, trying to safeguard the correct alimentation of the athletes and therefore, the proper school performance.

In the afternoon I walked the streets of Wukro, I met the other volunteers at the mission and I prepared everything to be ready the next morning, at 6am at the stadium in order to attend to the training session.

5:45am – The running track was a surface made of earth, dust and small rocks all around the place. The athletes, who run in sandals started to arrive along with the first sun rays. Around 70 people in total, boys and girls and organised in groups, executed the exercises that were told.

Stretching, warm-up exercises and series around the track, where compromise and seriousness with which the participants were performing was tangible from the stands. And not for nothing athletics are the national sport in Ethiopia; also, and even though the untimely hours, friends and colleagues of the runners came to watch the workout.

After the session was finished, the bananas were handed out as the runners chatted while stretched and had breakfast. Little by little everyone left while the sun started to heat. I, also hungry, walked back to the mission in order to have my breakfast, that very luckily was something more than just a banana.

From my visit to Wukro I could learn, both from the athletes as from Angel, that when someone believes in something and puts passion on it, for many obstacles or difficulties you may find, there is always a way to continue forward.

I hope you liked it!

I also wanted to remember that all the pictures you see are abailable to be purchased as prints and that all the benefits will be donated to the Etiopia Utopia Foundation (etiopiautopia.org).

You can request them emailing to hello@attitude4.com